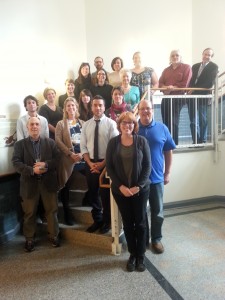 After the interesting tours and lectures of Day 1 of the 2016 IPM Working Group (IPM-WG) meeting the group got down to work on Days 2 and 3 to develop resources and update information on museumpests.net.  This work was interspersed with short presentations by group members that provided updates on research and educated members.  Read on to learn about what we did during our two-day meeting.

The MuseumPests.net image library, out of commission for the past few years is now back with a vengeance.  IPM-WG participants worked avidly to add images that had been submitted.  If you have an image to add of either an insect or damage, please contribute via the Image Submission form on the site. 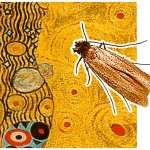 Publishing and presenting work on IPM projects is essential to development of the field but finding money for print publications is always a challenge.  To ensure widespread availability to the important content collected in the volume Integrated Pest Management (IPM) in Museums, Archives and Historic Houses – Proceedings of the International Conference in Vienna, Austria 2013 Edited by Pascal Querner, David Pinniger and Astrid Hammer.  The editors have graciously made the content available for free download on MuseumPests.net.  Pdfs can be downloaded of the postprints by section.

Have lunch with us 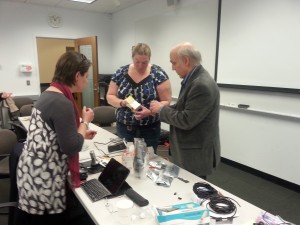 American Museum of Natural History Entomologist Lou Sorkin once again brought his version of fun snacks to the 2016 meeting with crickets and larva in a variety of flavors for the brave to taste.  While some ran from the buffet others claimed that they were tasty and crunchy.  Nobody said they taste like chicken! 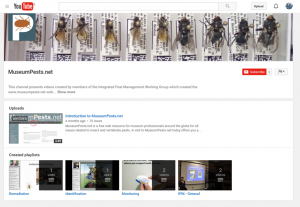 The IPM-WG has had a Facebook group set up for a couple of years but it was not actively used and there was no not a lot on the page.  The 2016 participants discussed the use of social media to publicize the work of the group, raise awareness of the museumpests.net site, aggregate IPM related stories from major media and provide a platform for members of the cultural heritage community to talk about projects.  A social media group consisting of IPM-WG participants from the Yale Libraries, Yale Peabody Museum, Winterthur Museum, and Harvard Herbaria rebranded the Facebook group from IPM-Working Group now to MuseumPests and started a #museumpests  account on Twitter.  The accounts feed from one to another.  MuseumPests also now has a YouTube channel where videos created by IPM-WG participants or vetted during our annual meeting will be posted.  To find out more about our social media presence or contribute content for distribution contact social@museumpests.net

What else were we up to?

Other participants worked on Pest Fact Sheets for termites and squirrels, a group is working on case studies in various forms of anoxic setups, soon to come are resources on IGRs and light traps and more is in the works.  Others spend time culling and updating our bibliographic resources and updating links on the museumpests.net site.  The site is a group effort and we are grateful that participants new and returning are willing to devote a few days of their time each year to keeping the site fresh and accurate.

We want to hear from you

Best practices are meant to be guided by the community responding to needs and providing a continuous feedback loop.  Surveys by the IPM-WG in 2005 and 2011 have provided information that participants have used to guide the development of resources for the site.  2016 meeting participants from NEDCC and others are working on our next survey which will be distributed via the PestList and other email lists.  We hope you’ll make your needs heard and we’ll share the results so that other organizations can tailor their training offerings to your needs. 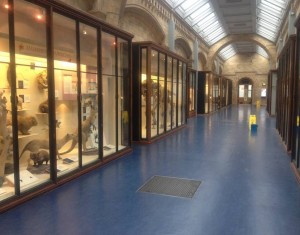 The NHM IPM program is Comprehensive and fully embedded into the museum culture with both managerial and financial support.  Components include the use of risk zones throughout the NHM facilities, an intensive staff training program, a KE Emu custom made IPM module that links directly to their computerized collections management system and a quarantine facility with a freezer facility big enough for a full size rhino, a smaller freezer and a hot/cold chamber.  These combined efforts have resulted in a significant decline in beetle and rodent pests.

However, there were areas of the museum galleries that still experienced ongoing infestations including a main thoroughfare.  After 2003 with dichlorvos/vapona no longer allowed for use the museum and needed an alternative to controlling the infestation.  Monitoring showed high levels of Tineola bisselliella and damage could be seen on the specimens especially on the wild cats, which were frozen several times.

Finding the source of the problem – found a few housekeeping issues but the age and design of the display cases made this space difficult to pest-proof.  Significant housekeeping efforts and use of desiccant dust made a difference but not enough to provide a long term solution.

Tablets were placed in their custom plastic holders in three galleries including the mammal corridor, the creepy crawlies gallery (which had visible moths flying around) and bird gallery with a history of intermittent infestations and the galleries were each separate.   Armando and Suzanne showed statistics maintained throughout the project.  In the creepy crawlies gallery, the only one closed off with doors at both end there was a substantial decrease in moths.  In the birds gallery it was discovered that there were remains of wool carpets under the display cases that were an ongoing food source for the moths.  While the Exosect caused a significant reduction in this gallery it wasn’t a silver bullet.

While the Exosect program contributed to a reduction in moths combined with other intensive housekeeping efforts, there are some important considerations.  The system is not cheap, approx. £1,200 GBP per year for the tablets.  It works better in enclosed spaces (confirmed as well by anecdotal evidence from colleagues at English Heritage sites), and works best when combined with adequate IPM efforts.

In the future NHM will look at using Exosect as part of their IPM programme while also looking at other ways of preventing pests e.g. biological control (parasitic wasp Trichogramma sp.).  They will also continue to implement IPM at the NHM through:

Exosect is not currently available in the US.  The EPA is now throwing up a red flag on pheromone mating disruption programs (despite their use in controlling stored food pests).  Pheromones are currently only allowed for monitoring uses not control.  The pheromone industry is generally geared to big agricultural biocontrol projects and museums are not much of a market.   This is a similar issue with the European Union biocides monitoring directive and Bob Childs and colleagues are fighting to make museum/cultural heritage voices heard in the EU so that some tools remain available for museum pest control.

ZPest Tracker coming to a phone or tablet near you 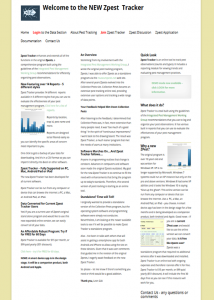 Leon Zak of Zaks software and the IPM list and webmaster since the founding of the group gave a short presentation on ZPest Tracker, an updated version of the ZPest program for recording pest captures available on musempests.net.  Based on his work with the IPM-WG Leon and his staff developed CollectionPests, a cloud-based system for recording pest captures but this program was seen as more extensive than needed by most institutions that don’t have the time or resources to spend on IPM.  ZPest Tracker is a more comprehensive program and ZPest and works with more recent Windows operating systems.  An Android app is almost ready with iPhone app to follow as stand alone programs.  If your building has GPS available it would automatically enter data location.  You can tap on a trap number to enter the pest data and then enter a count.  Zaks Software’s goal is to have the program and apps ready for September, 2016 in time for the upcoming Paris conference.  The program will be  $99/year which is considered within reach for most institutions.  A barcode reader is a future development.

Longtime IPM-WG participant and leader of the Identification Aids group, Pat Kelley, Vice President of Insects Limited, Inc. gave a talk on the webbing clothes moth for the benefit of the group.  Much of what we know about the biology of the moth is from Grace Griswold’s 1944 paper “Studies on the Biology of the Webbing Clothes Moth” she received a PhD in zoology in 1925 and continued studying household insects at Cornell University throughout her career.  Pat has been experimenting with videos for training and education.  He showed short video clips of took time lapse images of moth eggs developing into larva over five days.  Next he showed a clip of the larva voraciously feeding on feathers and other material.

Clothes moths usually breed in dark, out of the way places that are not likely to be disturbed. But raising the temperature speeds the egg hatching process.  At 55 Degrees Fahrenheit hatching time is 37 days versus just a few days at 80 degrees F.  As soon as the larvae hatch they start feeding. They can get into spaces four thousands of an inch – the width of a piece of paper or four hairs which explains how they can get into seemingly sealed vitrines.

Larvae fecals pellets match the color of what they are eating and they produce webbing from their mouth, forming mats that create microclimates to protect themselves.  Unlike the casemaking clothes moths that remain in their protective cases the webbing moths will come out but like to return as quickly as possible.

The female lays up to 200-300 eggs.  If she mated immediately she will lay in clutches but she is picking up potential food sources with her antennae and she will lay eggs near potential food sources.  Relatively poor fliers.  Instead of direct flight there is a lot of running and skipping/jumping.  (the casemaking clothes moth is a better flier) so for webbing moths Pat recommends flat open sticky traps so they can land near and run in.

Pat also showed that Insects Limited has developed a new

Dermestid trap, a mixture of pitfall trap with sticky trap, which will be ready for sale through the Insects Limited online store.  With normal sticky traps the larva would shed their skin and escape but they can’t with the pitfall trap.  The trap now combines a pheromone lure and the food source so it attracts and traps.  The food lure feather meal, powdered milk, ground insects remains effective for years (Pat have some going for 6 years) the pheromone lures last 2-3 months before they need to be replaced.  In Indiana, where Insects Limited is based, adults emerge from March – June.   Get your supplies now!

Congratulations to out to Pat for completing the requirements for his masters in Entomology, which he will receive this spring! 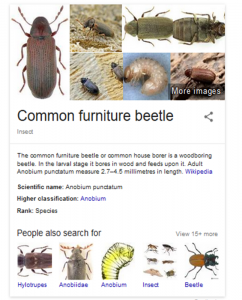 Tom Parker, PhD of Pest Control Services gave an overview of the most dangerous wood boring beetles for museum and library collections.  Look for a thorough write-up of his information soon on museumpests.net

Thanks to our New Sponsor

While the IPM-WG meetings have been based on the east coast, this has been based on the offers of hosting rather than any plan or need.  Moving the meetings would bring in participants from new regions.  Participants at the 2016 meeting were asked to check with their home institutions to propose potential venues for future meetings.  Winterthur Museum in Delaware and Insects Limited based near Indianapolis are potential future hosts and any others are welcome to indicate interest by writing to thechair@museumpests.net by June 1.  Check the Announcement section of the MuseumPests.net homepage for updates on future meetings.