The International IPM conference was this year hosted by the spectacular Louvre  in the centre of Paris. The organising committee was made up of museum and cultural heritage professionals from several  prominent institutes in Paris. The conference was a great success, both useful and enjoyable. There were 166 participants from 18 countries, with most European countries represented. 30 papers and 25 posters were presented.

The program covered a wide rage of topics loosely divided into five sessions: 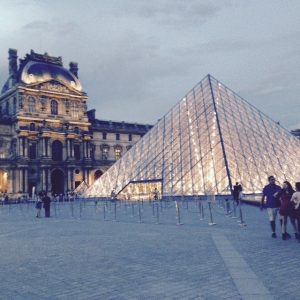 Each session was introduced and then chaired by a different expert in the field. The last session was set aside for discussion and conclusions summarized by David Pinniger. The presentations were stimulating and informative and again highlighted the need for coordination and the importance of communicating.  Different collections have different priorities but there are common factors and the IPM community has accrued a lot of knowledge and experience over the past 20 years which can help those starting out or trying to implement what might seem to be a daunting task. A key message was to prioritise, put in place an IPM policy, strategy and programme and use the tools and experience already available.

One thing found particularly interesting at the poster session and then reiterated in Pasqual Querner’s presentation, is the emergence of the grey silverfish Ctenolepisma longicaudata. It is definitely something to keep an eye open for, as the fact that this seemingly ‘new’ pest has become prevalent enough to be recorded and reported on at this conference by 4 different people suggests that it is a problem. It also confirms Dave Pinniger’s view from the discussion that we need more data and information on new pests as climate change means we may expect to see new species or the spread of existing ones. 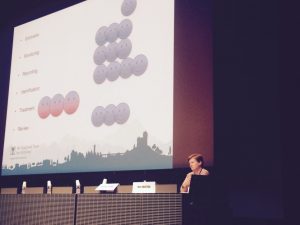 Another important message that was disseminated was the completion and publication of the European standard for integrated pest management (IPM) for the protection of cultural heritage. Lisa Nilsen presented the standard (NF EN 16790:2016) that she and a group of others have been working on for some time. It was really encouraging to hear extracts from it in other presentation and to see that this standard is already being used and followed as the benchmark it was intended.

The posters were set up in the space allocated from lunches, tea and coffee breaks so there was plenty of time to look at the posters and mix with the other participants informally.

The social events were also wonderful. The welcome reception was at the beautiful Hotel de Sully. Built from 1625 near Place Royale (today Place des Vosges), this townhouse was a development commissioned by King Henry IV of France and overseen by Maximilien de Béthune, Duke of Sully (1559-1641). It stayed in the Sully family until the mid-18th century.

At the end of the week there was an opportunity to see behind the scenes at some of the fascinating cultural heritage institutes.

As always with these conferences the social events provide a stimulating opportunity to network with like-minded individuals and provides a catalyst for future collaborations and projects.

The Natural History Museum, London representatives had a chance to exchange experience and draft future collaborations with the IPM Coordinator at the British Museum and relevant IPM specialists from mainland Europe.

A good time was had by all. Many thanks to the organising committee for facilitating such a good conference and the presenters for providing a wealth of information.

Finally, one exciting outcome of the meeting was the news that the next International Heritage IPM conference will be in Stockholm, Sweden in 2019.