The second and third days of the 2015 IPM Working Group meeting hosted by the Smithsonian Institution’s Museum Conservation Institute continued with return to the standard meeting format of discussing the usage and needs of the museumpests.net website and the goals established by the subgroups and participants volunteering for assignments to develop new resources and update portions of the site.  In addition, participants gave updates on some of their IPM related projects for the education and benefit of the members.  These included short presentations by:

Cigarette beetles (book worms) are cinnamon colored beetles that fly and characteristically roll over on their backs. The larva eats books creating tunnels. The eggs are often found in imported dried red spices and paper mache doll puppets. They are usually found in areas that do not screen their windows. They are found in Malaysia and natural food store spices in bulk. You might notice a cigarette beetle egg pop when you smoke cigarettes since they are also found on tobacco leaves. Tom described a project that included flying a 747 of art work for the new wing of the Dallas Art Museum. Wood boring beetles were suspected when holes were found in the back of black lacquered chairs with inlaid mother of pearl. The cigarette beetles were eating the bed of paper mache that the mother of pearl was laid in.  Damage was also found in an antique dry sink where glue was used for its joins. Piles of powder on the top edge of books is an indication of infestation. When the books are removed the frass is obvious.  The book worm larva can do severe damage to old books where the paper is made up of ground up wood. Lowering temperature is a successful technique removing infestation from collection items. Putting in a freezer for a week will work although about three days should be enough. Minus 20F at 72 hours is recommended. Ice crystals must form within 4 hours or the beetle may build up “antifreeze”. Parasitoid wasps of cigarette beetles 2 or 3 mm long may show up in traps along with the beetles.

Does the Use of Pheromone Monitoring Traps Make my Collection More Attractive to Insect Pests? – Patrick Kelley

Grain moths were used as part of a pheromone study including  different types of fabric and sticky traps. The fabrics used include Antique wool carpet, modern synthetic carpet, modern synthetic flat weave (black) antique wool flat weave (ivory) and antique wool flannel (red). The fabrics were exposed to the pheromone using black four inch drainage tubing in two foot long sections. A wire hanger was placed inside to hang a bullet lure of a 4.5 milligram dose of pheromone blend. Screening on end prevented accidental contact with the lure. A constant air flow was blown past the pheromone onto the fabric swatches for two weeks. The measured wind current target was 130 and 160 per minute allowing a constant light breeze for two weeks. 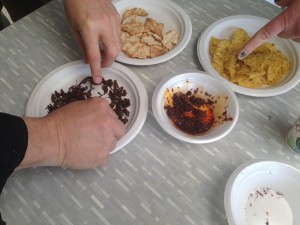 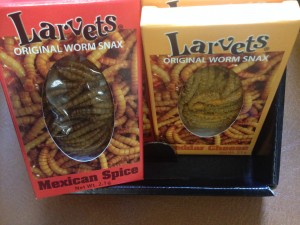 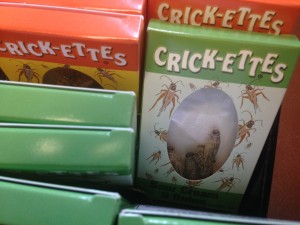 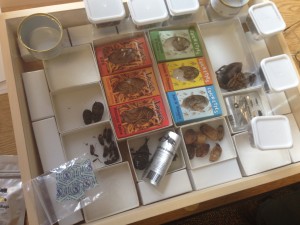 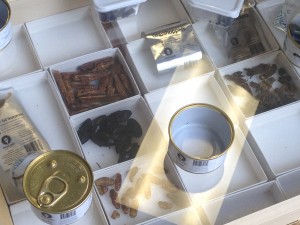 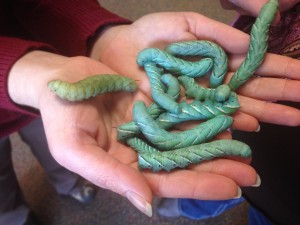