Though not considered an immediate risk to most cultural heritage collections, subterranean termites (Reticulitermes spp., Coptotermes spp. and Heterotermes spp.) are a pest of significance in the heritage community. Colonies ranging from a few hundred termites to several hundred thousand can cause extensive damage to historic structures before evidence of infestation is noted. Control efforts are challenging due to a variety of factors, including termite adaptability, intricacies in building design, necessity of implementing least-invasive control methods and limitations of product efficacy.

Am I at risk for subterranean termite infestation?

Subterranean termites should be a significant part of your IPM plan if you live in the red highlighted areas of the world: 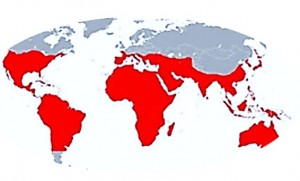 If you live in the United States, your risk increases in the southern and coastal areas highlighted in blue. 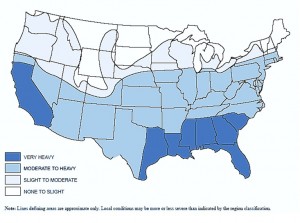 What kind of risks do subterranean termites pose to my collection?

Subterranean termites are eusocial insects that exhibit highly developed, cooperative behavior patterns similar to hymenopteran species. Workers comprise over 80% of the total population. Symbiotic protozoa living in the gut of workers enable digestion of cellulose, a typically indigestible organic compound found primarily in plant material. Foraging workers spend most of their lives underground, moving primarily in the top 18 inches of soil. When the opportunity presents itself, they will readily attack, infest, and consume cellulose-rich components of man-made structures. The following are at risk for infestation in a heritage setting:

Over the last twenty years, termite baiting with IGR’s has become a popular replacement for traditional liquid trenching treatments. Since subterranean termites spend most of their lives underground, the majority of termite baiting systems involve the installation of below-ground feeding stations at 10-20 foot intervals around a structure. The stations are typically prebaited with a nontoxic, cellulose-containing material to instigate large-scale consumption by the worker caste. In theory, workers foraging in a given area near the protected structure eventually wander into one or more of the stations and begin to feed. When activity is noted, the original nontoxic bait is traded out for bait impregnated with a termiticide. In most cases, a slow-acting insect growth regulator is used to disrupt the breeding cycle of the colony. The colony declines and eventually collapses as the worker population is reduced.

How do IGR’s affect subterranean termites?

Insect growth regulators designated for control of subterranean termites are usually classed as chitin inhibitors. During maturation, juvenile termite workers increase in size. As a result, they outgrow their exoskeleton. Since the termite’s internal moisture level is sustained by the exoskeleton, the growth process could cause premature mortality due to desiccation. To alleviate the problem, the termite’s body produces a carbohydrate called chitin to form a new skin. As the termite grows, the old skin is cast off in a process called molting and the new layer underneath remains intact through the next stage of development. This process may occur many times during maturation. Chitin inhibitors disrupt the juvenile termite’s ability to produce chitin. Without the new exoskeleton, the termite expires quickly during/immediately after molting.

What are the advantages in using IGR’s (baits) for subterranean termite control?

What are the disadvantages in using IGR’s (baits) for subterranean termite control?

It should be noted that, despite claims by some to the contrary, the subterranean termite bait matrixes found in most popular below-ground baiting systems do not proactively attract foragers in the vicinity. Instead, perimeter station placements serve as a series of stumble traps that monitor the soil for colonies making their way closer to the building. Caution should be exercised when giving consideration to the use of a baiting system as a stand-alone method of prevention. Essential to efficacy are: