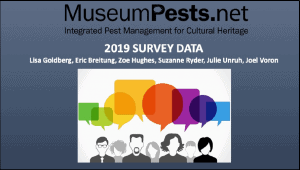 The museumpests.net working group, formerly the Integrated Pest Management Working Group (IPM WG) conducted a survey in 2018 to gather information about current trends in resource allocation and operational practice in how collecting institutions monitor and eradicate pest incursions. The survey was constructed over the course of two working group meetings, as members grappled with how to ask questions that would allow respondents from institutions of all sizes to describe their collecting focus, budgets, staff allocations, preferred methods for pest treatments, and any observed changes in pest populations. Distributed worldwide, the survey collected data that was evaluated using SurveyMonkey’s innate analytics and Tableau, an open access data visualization program. Use of Tableau allowed us to pose different questions about the data by exposing relationships between various data sets, but also revealed flaws because of how we constructed the question set. This team will report on some general outlines for worldwide and regional trends in museum pest control methods, budgetary and personnel parameters, and pest populations. The museumpests.net working group is an unaffiliated group of museum and collections care professionals who collaborate remotely and gather once per year to provide updated information on their website. The site includes free and accessible key information about prevention, monitoring, identification, solutions, and resources about museum pests. 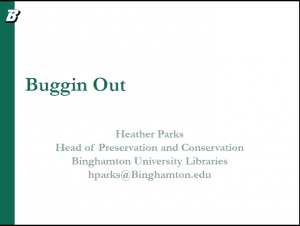 In 2019 Binghamton University initiated a Buggin Out IPM project with almost 8,500 traps being checked to determine our bug problems. We checked over 160 traps weekly throughout four buildings and used the ZPest Tracker to assist with interpreting the data. That data revealed book lice, carpet beetles and silverfish were a major issue in select areas. When we shut down in 2020, my hypothesis was that our bug number would grow due to limited human presence, darkness and traps that were left too long, encouraging predator insects. However, we ended up with 20% fewer bugs. It turns out the biggest player was mother nature in providing a drier year than 2019. I’ll use data to show the trends of infestation, the roles of humidity, predator insects and the changes in library use between 2019 and 2020 to explain our findings.

Lizards in the Library:  A case study of an established resident population of Mediterranean house geckos in collections storage areas and the potential impact of global warming on other institutions 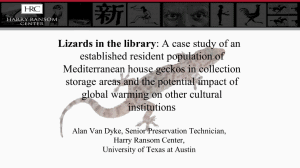 Integrated pest management programs in cultural institutions are typically concerned with common pests living within buildings, such as insects or rodents.  The Harry Ransom Center, however, has an established population of Hemidactylus turcicus (Mediterranean house geckos) living within its building, including in collection storage areas.  These house geckos are common in Austin, Texas, where the Center is located, and are generally considered beneficial as they are insectivores.  While using insectivores to control insects in a cultural institution setting is an intriguing idea, the presence of the geckos presents its own concerns.  Gecko droppings can stain collection materials as well as potentially carry salmonella, a health hazard, and dead geckos can provide a source of food for pests.  It is unknown what the Ransom Center geckos feed on specifically, as that they are too small to catch normal H. turcicus prey, though the Center does have incidental silverfish as well as odd beetles and the very occasional carpet beetle.  Specimens of H. turcicus in the Ransom Center are physically smaller than average (5 cm. vs 11 cm. in length).  Individuals are rarely seen outside of sticky blunder traps, though occasionally one can hear them chirping in darkened areas of collections storage areas.  Because geckos are resistant to commonly used pesticides, they are especially difficult to eradicate.  H. turcicus is an invasive species to the Gulf of Mexico region of North America, originating in the Mediterranean.  H. turcicus are spreading globally.  Their northern range limit seems to be controlled by winter temperatures.  However, with global warming, it is possible that the range of H. turcicus can expand into more northern parts of Europe and North America in the future (Weterings and Vetter, Current Zoology, Vol. 64, Issue 5, 1 October 2018, pp 559–573, https://doi.org/10.1093/cz/zox052).  They can be introduced into new areas rather easily, hitching rides in boxes and containers.  It is quite possible that H. turcicus or other species of house gecko may be accidentally introduced into collections storage areas and permanently establish populations in institutions in regions previously unaccustomed to small house reptiles. 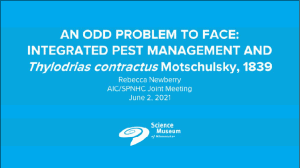 Thylodrias contractus, or odd beetle, is an unusual dermestid beetle. The males and females look strikingly different from each other and neither looks like any other dermestid. They do have the same tastes as dermestids, preferring the tasty proteins found in natural history collections. The females look like larva and cannot fly. They cannot easily move from place to place.  They must be introduced. The best control method for odd beetles is prevention. Standard IPM procedures of inspection, isolation, preventive treatment, and monitoring should work.What happens, then,  when a fairly robust IPM program fails to control odd beetles?The first confirmed odd beetle in the state of Minnesota was found in a display at the Science Museum of Minnesota (SMM) in the 1980’s. The infestation spread to a biology storage room, among other spaces. Regular IPM monitoring began in the early 1990’s and has continued to the present. When the museum moved to a new building in 1999, the conservation department used extensive IPM methods to prevent bringing odd beetles along.Unfortunately, there were a few hitchhikers.  Every few months we find very small outbreaks of odd beetles during twice monthly IPM monitoring. They show up in unexpected places like offices and break rooms and have largely been excluded from collections due to rigorous isolation and low temperature treatments. It’s a frustrating experience since it’s been impossible to find an infestation source. We experimented with insect growth regulators and saw little change.I consulted with Tom Strang in 2014 and he suggested mapping the occurrences over time to predict where and when they might show up again. Using our IPM data, we mapped all odd beetle occurrences since 1999. The patterns which emerged from the mapping help us predict when we may see an outbreak. Then we use targeted pesticide applications along the wall baseboards. While the odd beetles have not yet been eradicated from the building, we are seeing encouraging reductions in their numbers.